The causes of congenital deafblindness are varied, resulting in a population with varied health, hearing, vision, other sensory, neurological and motor presentations all of which will affect how communication develops and what choices are made about the methods of communication used and taught.

In many individuals, speech is unlikely to develop to a functional level, or to be the most effective means of communication. The acquisition of symbolic understanding necessary for any form of language development is also a challenge.

As diverse as the congenitally deafblind population is, so are the methods of communication used. They include speech, sign language, other modified or simplified signing systems, all forms of Alternative and Augmentative Communication (AAC) and pre-intentional and intentional communicative behaviours.

Many AAC methods are introduced on the assumption that language in a spoken form is not going to be adequate for communication and therefore language symbols in a visual form will provide an alternative way to develop language and will result in better communication. Introducing these visual systems to someone with compromised visual development, needs to be done with good knowledge of the person who is deafblind’s visual capabilities and then designing  visual symbols that are within these capabilities.

Design factors that may (depending on the individual) improve visual accessibility to picture symbols include:-

If your visual symbol system is a signing system, then increasing the visibility of the signs you make is an important consideration. This can be improved by:-

Note that: Movement and locations of signs may be detected, however details of hand shape may by missed

There will be cases that despite these modifications for improved visibility, visual development is just too compromised  to make a visual communication system viable. It may be then that a tactile system would be considered, where the language or message symbols are recognised primarily through touch and the tactile properties of the symbols. Again however, we are assuming that the motor system and tactile sense are adequate for this task. Access the Tangible Symbol System Primer in the “See also” sidebar to learn more about Object Symbol Systems.

If an appropriate symbol system for communication has been determined, it may be possible to transfer these symbols to a device that will output a spoken message. When compared to devices designed for a hearing, seeing population, speech generating devices for use by someone who is congenitally deafblind may be different in that they may:- 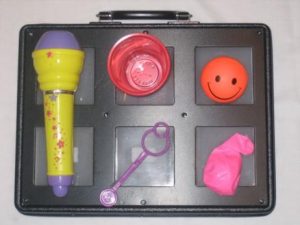 Example of the use of tangible symbols on the Symbol Communicator for the Visually Impaired by Enabling Devices. 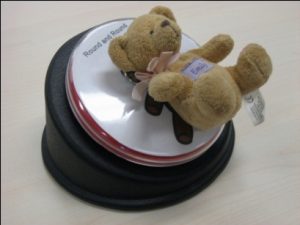 A multi-level single switch device, adapted for a tactile symbol.

Another way to introduce language symbols that can be felt, rather than seen, is by modifying visual hand signs to incorporate a touch component. Note however, that touch and vision may also be used together, rather than exclusively. Information from one sense may be used to confirm or add to information received through another. Tactile methods of signing used with people who are congenitally deafblind usually need to be distinguished from tactile forms of signing used by people with acquired deafblindness. Forms of tactile sign used by those who have acquired deafblindness may be referred to by the term “Tactile” and involve tactile modifications to an existing officially recognised sign language and are not covered in this section.

While it would be convenient to use the same tactile signs with everyone, tactile signing systems are generally developed for the individual. This is because individuals recognise, tolerate and understand touch differently and have different communication needs. Making a record of tactile signs used with an individual, by writing descriptions and taking photos and video is a great start to ensure everyone is communicating the same messages in the same way.

When developing a touch system of communication be mindful that we all have a different capacity to tolerate and accept touch on different parts of our bodies and from different people. Develop in close conjunction with those who know the person who is deafblind best.

Types of signs combined with touch for people who are congenitally deafblind include:-

Signs are made onto the body of the person who is deafblind by the communication partner. The officially recognised sign from the regional sign language is used as a starting point, to develop the body sign. Modifications made to the sign will depend on how the person who is deafblind tolerates that type of touch on any given part of his/her body.

This type of signing is usually used for receptive language development and sending a message to the person who is deafblind. This system is unlikely to transpose to an expressive method, as the person who is deafblind receives a particular touch sensation, but is unlikely to know how that touch was created by the communication partner, and therefore will have a limited capacity to know how to recreate that sign themselves. Co-active and hand-under-hand methods are designed with expressive communication in mind.

Image from: The Learning Place

The person who is congenitally deafblind  places their hands over the hands of the person signing to them, feels the shape of the hand and the movement of the sign, they are free to pull their hands away if they wish.

The hands of the person who is congenitally deafblind are manipulated into the hand shape and movement of the sign. One or two hands can be used. This method can be used to develop receptive and expressive signed communication. There is some debate about whether signs felt in this manner, can be independently reproduced by the person who is deafblind.

Image from The Learning Place

While not recognised as a signing system as such, is a frequently used method of touching the body or around the body so that the person who is congenitally deafblind will feel direct touch, vibration or  movement of air on their body. Each type of touch cue has a different meaning and are generally used to let the person who is congenitally deafblind  know what is about to happen or to give instructions. Touch cues do not use a conventional signing system as their starting point and are not designed to be used more than one at a time (eg to form a sentence)

The regional finger spelling alphabet is taken and adapted to be performed onto one hand of the person who is deafblind. A high degree of language competence and literacy potential is required. When introduced it may be to sign the initial of people’s names for example.

Is there a language of deafblindness?

Someone who is deafblind will not perceive aspects of an event, object or experience in the same way a person with sight and hearing would perceive them. What they find meaningful or pertinent will be different because of the different input from and the different balance between their senses.

A person who is deafblind may remember an experience as the feeling or impression it left on a particular part of their body or a movement repeated during that experience or a particular smell, which they soaked up by taking repeated deep breaths. When they recreate this outside of that context, hearing, seeing people, not necessarily aware of the context that the movement of gesture arose in, may see these “re-creations of movement” as stereotypic movements or self stimulation. They are not necessarily aware of the exciting drumming session in music yesterday, or the rocking of the boat during the ferry trip, or that the person who is deafblind always rings the brass bell at the front door of grandma’s house, with a downward tugging motion.

The topic of developing communication through touch and movement, initiated by a person who is deafblind has been explored by a number of authors and is receiving more attention and recognition with it becoming the topic of several recent Masters and Doctoral thesis.